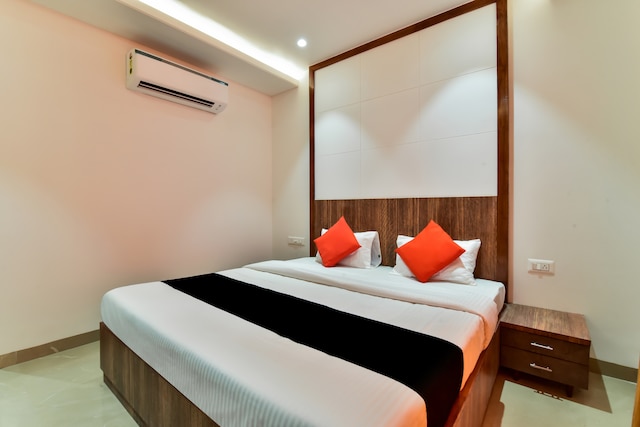 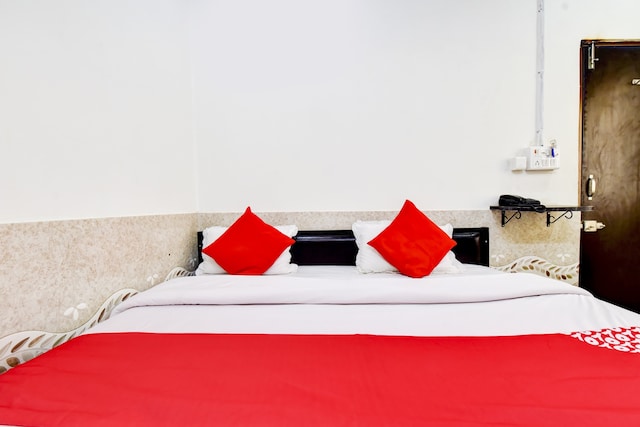 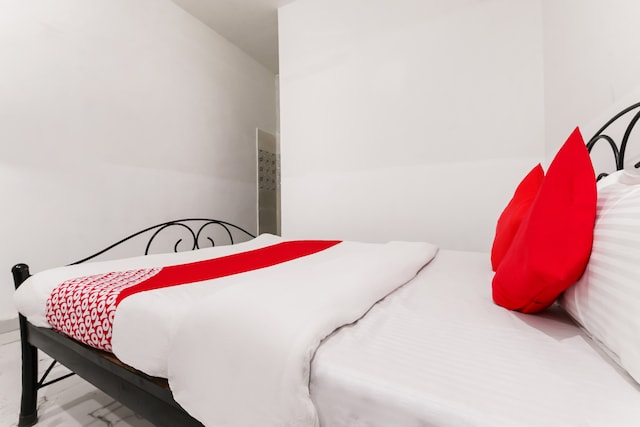 Rawat Nagar, Jodhpur· 10.3km
NEW
Free Wifi
Geyser
CCTV Cameras
+ 6 more
₹0
per room per night
Get access to exclusive deals
Only the best deals reach your inbox
Your email
12
Jodhpur was founded in 1459 by Rao Jodha and is situated in the western region of Rajasthan. Referred to as the Sun City for the sunny weather it enjoys the year round, Jodhpur is among the popular tourist destinations in Rajasthan.

Jodhpur is also called the Blue City owing to the row of blue-painted houses surrounding the Mehrangarh Fort. Mighty Mehrangarh, the fort that lords over Jodhpur, is an architectural masterpiece. The Blue City is well and truly blue! Those looking to explore the area will come across a tangle of winding, medieval streets punctuated by incense, roses and sewers. The shops and bazaars located in the maze sell everything - from trumpets to snuff and saris. While blue marked the home of a Brahmin, a number of non-Brahmins have painted their houses blue as well. Why blue? Because it helps repel insects. New-age Jodhpur goes beyond the city walls, but the old Blue City and the larger-than-life fort still attract travellers from across the globe. This crowded zone is Jodhpur’s main tourist area. In fact, speaking to someone would mean having to haggle with them over an item they want to sell you. Some of the areas further west of the old, like Navchokiya, are atmospheric with less hustling. Since it lies in the geographic centre of Rajasthan, Jodhpur is the perfect starting point for tourists looking to explore the region. The 72-hectare Rao Jodha Desert Rock Park is a model of ecotourism. It has been restored and planted with native species to showcase the natural diversity in the region. The park lined with walking trails that lead to the city walls, around Devkund Lake. One can also spot local birds, reptiles and butterflies. The Mandore Gardens are located 9km north of Jodhpur’s centre. Mandore was served as the capital of Marwar before Jodhpur was founded. The gardens have rock terraces and are home to grey langurs and dark-red cenotaphs. The edifice has a high shikhara (spire), a domed fore chamber, and fine sculpture of small carved elephants and lions. The Clock Tower stands tall as an old city landmark. It is surrounded by vibrant sounds and smells of Sardar Market. The winding lanes of the old city branch out to different directions from here. If one heads westward, the old city’s commercial centre will greet you with its alleys and bazaars. The best time to visit Jodhpur is during the winter months between October and March. It is never a good idea to visit during summer as the mercury soars close to the 45 degree Celsius mark.

accommodation in Jodhpur by OYO

Since Jodhpur is a travellers’ hub, there are a number of budget and premium OYO hotels in the area. For tourists who want to stay near the transport hubs can choose a room near the railway station or bus stand. One can enjoy the old-world charm of Mandore by choosing an OYO Room in the vicinity. There are rooms available near Balsamand Lake and Mehrangarh Fort..

Marwar Festival: October
The Marwar Festival is a two day celebration held in the honor of the heroes of Rajasthan. Classical folk dance and music mirroring the battles fought by the brave Rajput heroes are the main highlight of the festival. Apart from this, a camel tattoo show, horse riding and polo are also organized. Many tourists flock in Jodhpur to witness the grandeur of the festival and to learn more about Rajasthan’s history. OYO ensures these tourists don’t have to worry about their stay in the city amid these celebrations by providing ample accommodation with modern amenities.
Read MoreRead Less

Showing 1 - 10 of 10
1.
What is the best time to visit Jodhpur?
The best time to visit Jodhpur is from the months of October to March. This is the peak season where Jodhpur sees the maximum number of tourists because it is very pleasant around this time. The temperature can stoop as low as 10°C, but it won’t go beyond 25 degrees. This makes it perfect to enjoy all the desert activities. View more hotels in Jodhpur.
Read MoreRead Less
2.
What is there to do in Jodhpur?
Also known as the Blue City, Jodhpur has a lot to offer in terms of tourist attractions. Start with exploring the blue houses. The best view will be offered by the top of Mehrangarh Fort. Jaswant Thada, an intricately crafted cenotaph is a great place to relax at; however, you can also check out Rao Jodha Desert Rock Park. On your trip to Jodhpur, make sure that you do not miss out the clock tower, step well at Gulab Sagar Makrana Mohalla, Umaid Bhawan Palace, and Mandore and Mandore Gardens. Find more hotels in Jodhpur.
Read MoreRead Less
3.
Help me find some good hotels in jodhpur near railway station
There are a lot many good hotels near the railway station in Jodhpur. You can filter out the best options by choosing your preferred option under "property type" category. Check for the availability and book a stay accordingly. Find more hotels in Jodhpur
Read MoreRead Less
4.
What are the best places to eat in Jodhpur?
Jodhpur is a paradise for foodies. When you are here, do not miss out on these places – thali at Gypsy (it includes 29 items), non-veg or veg food at Mehran Terrace, Baradari Restaurant, Gulab Jamun at Hanwant Mahal, and exotic drinks at White House Café. Also try some lip-smacking street food at these places – Kachori at C Road Sardarpura, sweets at C road, Nai Sarak and Shanicharjika Than, chaat at Pal Road, Lassi at Clock Tower Market, Pani Patasa at Mahalaxmi Misthan Bhandar and Dal Bati Churma from literally anywhere.
Read MoreRead Less
5.
Is Jaisalmer covered by metro/bus network? What is the best way to travel across the city?
There is no metro network in Jodhpur, but there are other transportation options available which are much more convenient and cheaper. You can take buses, but the frequency is quite low. You can take cabs or taxis, but make sure you have fixed the price beforehand so there is no hassle at the end. There is always the option of auto rickshaws and cycle rickshaws for covering shorter distances.
Read MoreRead Less
6.
What are the best places to shop in Jodhpur?
Jodhpur is the right place to go on a shopping spree because it has everything for everyone. Start with buying some exotic spices at the Clock Tower, also known as Ghanta Ghar. Get some traditional bandhani items from Nai Sarak. Sojati Great Market has some nice handicrafts, Jewellery, and dye fabrics. It is also a great place to buy souvenirs from. Also check out Mochi Bazaar for the best footwear, Umaid Bhawan Palace Market, Kapraa Bazaar, Sarafa Bazaar, and Tripolia Bazar.
Read MoreRead Less
7.
What are the best monuments to see in Jodhpur?
If architecture and monuments are your thing, visiting Jodhpur could be memorable for you. Umaid Bhawan Palace is the most expensive and exquisite hotel in Jodhpur. The other places you must check out apart from this are Rai ka Bag Palace, Phalodi Fort, Phool Mahal, Jal Pol, Zenana Mahal, and Loha Pol.
Read MoreRead Less
8.
What is Marwar Festival?
Initially known as Maand festival, Marwar Festival is celebrated every year in Jodhpur around September or October. It is celebrated at the time of full moon in honour of the Rajput heroes and their rich history. It is a major tourist attraction and people from all around the world come to be a part of it. The main attraction is dance and folk music around the romantic lives of the past Rajasthan rulers.
Read MoreRead Less
9.
List a Few places to visit in Jodhpur.
Places like Mehrangarh Fort, Sheesh Mahal and Takhat Milas are few places that are visited by tourists. To know more about places to visit in Jodhpur click on the link below: https://www.oyorooms.com/blog/jodhpur-travel-guide/
Read MoreRead Less
10.
Find me some good 4 star hotels in jodhpur
You can find some of the finest accomodations at Jodhpur, from OYO rooms. To filter them, please click on the "premium" option under "property type" categories from the left of the page.
Read MoreRead Less
HOTELS BY CITY
Hotels near meHotels in GoaHotels in PuriHotels in MahabaleshwarHotels in OotyHotels in JaipurHotels in ShimlaHotels in ManaliHotels in UdaipurHotels in MussoorieHotels in PondicherryHotels in DelhiHotels in MumbaiHotels in NainitalHotels in LonavalaHotels in MunnarHotels in BangaloreHotels in MysoreHotels in DarjeelingHotels in Mount AbuHotels in KodaikanalHotels in HyderabadHotels in PuneHotels in ChandigarhHotels in ShirdiHotels in AgraHotels in GangtokHotels in CoorgHotels in ChennaiHotels in TirupatiHotels in DalhousieTravel GuideAll Cities HotelsCoupons
MOST POPULAR HOTELS
Hotels in HaridwarHotels in KolkataHotels in AhmedabadHotels in ShillongHotels in RishikeshHotels in VaranasiHotels in AlibaugHotels in MandarmaniHotels in SaputaraHotels in DamanHotels in OotyHotels in YercaudHotels in AmritsarHotels in MaduraiHotels in CoimbatoreHotels in KasauliHotels in DehradunHotels in DharamshalaHotels in GuwahatiHotels in LucknowHotels in McleodganjHotels in KatraHotels in Port BlairHotels in IndoreHotels in JaisalmerHotels in JodhpurHotels in PachmarhiHotels in VijayawadaHotels in TrivandrumHotels in Vizag